Even though she has a degree in Chemistry, Sister Jessica Benson has found the career she loves – working in the trades. That’s what Jessica said in the recent article which appeared in Wisconsin Regional Training Partnership (WRTP).

Jessica said she learned about construction opportunities from some acquaintances who told her about BIG STEP, an organization involved in recruiting construction workers. After attending information sessions, she enrolled in apprentice readiness training classes delivered in partnership with the Carpenter’s Union. The rest, as they say, is history.

Although Jessica has many family members in the trades, she never thought her career would move in that direction. But Jessica has found that she loves the work. She really likes the different projects. Plus, the transition has been made easier because of a very supportive team that is willing to teach and help.

Jessica encourages other women to join the trades. She is an active Union member and really appreciates the support from Sisters in the Brotherhood. As for a career choice, Jessica believes Carpentry will give her a broader range of experiences than Chemistry, which is important because she likes to try new and different things.

CLICK HERE to read more about Jessica’s career transition and learn about her first job working on the Bucks Arena project. 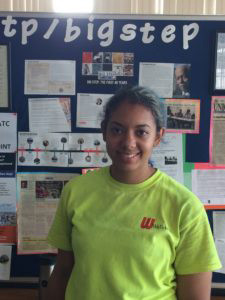